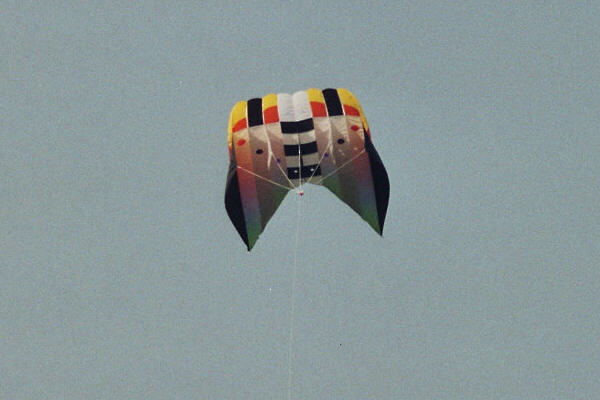 In spring of the year 2005 I was very surprised to see an advertisement for Flowforms by the german company InVento. They look very similar to my Flowform FF04A. They offer three sizes of Flowforms for a really cheap price.

In may 2005 I got in contact with the company InVento. They told me, they had made new drawings for those Flowforms. About the licences they had checked existing patents. To avoid more trouble they offered to send one of the HQ Flowforms to check the differences between my Flowforms and the HQ Flowform.

At the end of june in 2005 I have got a Flowform 2.0 from InVento. The design and the making of that kite is really very good. For that size of the kite the used fabric is too heavy. The bag of the kite is designed to use as an anchor. But in my opinion the bag filled with sand has not enough weight to hold the kite on good wind conditions.

Immediately I started with some measurements on the kite. With these information I can compare the HQ Flowform directly with my Flowforms.

The dimensions of the HQ Flowform were compared with my older Flowform FF04, too.

At the beginning of august 2005 I read the experiences with the HQ Flowform 2.0 by Peter Bults. Until that time I was not able to test my HQ Flowform.

In the middle of august I could make my own experiences with the HQ Flowform. The wind was very slow. the rising speed of the kite was very slow. The kite flew with a very low angle on the line and falled down if the wind speed decreased.

I have spoken with Frank Ludwig, having the Flowform 4.0 in stock. He made very good experiences with that kite. And Ralf Dietrich, who wrote an article about the Flowform 7.0 was satisfied with the kite.

It tooks until the end of august to get a photo of my flying HQ Flowform 2.0. At a wind speed of nearly 4 Bft (about 12 knots) it just kept flying. It was not possible to get a larger flying angle even with pulling on the flying line.

As the experiences show, most problems has the smaller HQ Flowform 2.0. In my opinion the problem is the too heavy fabric and the the different upper leading edge. The velocity on the upper leading edge is not enough to lift the heavy kite.

Perhaps the HQ Flowform 2.0 will fly better in lower wind speeds, if some modifications will be done at the upper leading edge. The company InVento got those information and is working to get better results.

Remarks:
The company InVento created those products based on my construction plans with small changes but without my knowledge. I earn no money with the HQ Flowforms. Meanwhile there is an active communication with InVento, maybe that will lead to a new version of the Flowform.